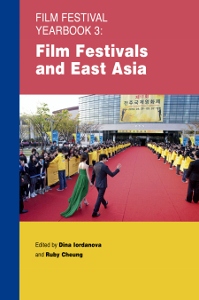 For a table of contents see here: FFY3 Flyer

The most exciting developments in world cinema over the past two decades have been linked to East Asian countries such as China, Japan and South Korea. Films made in East Asia triumph at festivals around the globe. Booming film markets are attached to the most important film festivals in Hong Kong, Pusan, Tokyo and Shanghai. The West is only just beginning to wake up to the importance of these film festivals to global film distribution.

In their latest volume, Film Festivals and East Asia (2011), scholars from the University of St. Andrews chart cutting-edge developments in global film. Prof. Dina Iordanova has stated: ‘In opening up debates on the worldwide network of film festivals we are laying necessary groundwork for the understanding of global film circulation,’

The publication brings together the work of high profile critics, academics, and festival practitioners based in various East Asian countries and in the West. In recognition of the innovative work featured in the volume, a launch event is being organised at the Hong Kong offices of the British Council, on the eve of the next Hong Kong International Film Festival.

‘The Film Festival Yearbook project represents a unique opportunity to study the multi-faceted phenomenon of film festivals. It focuses on both global networks and local practices and sheds new light on the artistic, economic and political issues that are currently reshaping the global cultural field.’
– Jean-Michel Frodon (Cahiers du cinema)

‘This new anthology captures the enthusiasm for East Asian cinema felt by film lovers and film professionals the world over.’
– Chris Fujiwara (Editor of Undercurrent, FIPRECSI)

Dina Iordanova is the leading international specialist on global film festivals; she has published a series of volumes on subjects such as The Festival Circuit (2009), Film Festivals and Imagined Communities (2010) and now Film Festivals and East Asia (2011). She is Director of the Centre for Film Studies at the University of St Andrews in Scotland where she leads The Leverhulme Trust project ‘Dynamics of World Cinema’ (www.st-andrews.ac.uk/worldcinema).

Ruby Cheung is The Leverhulme Trust Research Associate at the University of St Andrews, Scotland. Her research interests include East Asian cinemas, diasporic film distribution, Chinese diasporic on-line fandom and film promotion. She co-edited Cinemas, Identities and Beyond (2009) and Film Festivals and Imagined Communities (2010). Her study on the Chinese-language epic and diasporic spectators appears in The Epic Film in World Culture (Routledge, 2010).